Everyone had the opportunity to listen to inspirational speakers and scientists including the following five scientists:-

A medical doctor, distinguished scientist, particularly in the area of human fertility and a well-known television presenter.

Nuclear fusion (rather than nuclear fission) may one day play a key role in solving our energy problems. It’s been a long time coming because of some very tough scientific problems. Most have been solved and an experimental reactor is being set up. Kate, who at 14 wondered whether to be a dancer or a scientist, is in the thick of these developments.

A leading research geneticist (at University College London) and a prolific author with many beautifully written books on evolution.

A solar researcher based at the Mullard Space Science Laboratory, UCL’s Department of Space and Climate Physics.  Talking about her fascinating area of study: the activity in the atmosphere of our nearest star, the Sun.  She has been a Dorothy Hodgkin Research Fellow and is a member of the Education Committee at the Royal Society.

Mark is an engineer and materials scientist.  He is the Professor of Materials and Society at UCL where he teaches and runs a research group in the Mechanical Engineering Department of UCL. 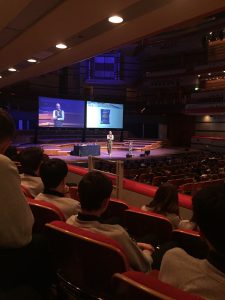