Once again this was an enormous success.

The increase in numbers did present us with a few physical and logistical challenges.  However, the amazing support and hard work of our volunteer team meant all parcels were distributed on 20 December.

As in previous years, the offer to the recipients was a parcel which contained a turkey, together with fresh vegetables plus trimmings of pigs in blankets, stuffing and gravy.  All of this enables them to produce a Christmas dinner.  Other seasonal items were also included together with the offer of some standard tinned food items to see the family through the Christmas holiday.  Toys/gifts were also provided.

As a result, 61 families received a parcel.

Schools in Whitchurch, Wem and Malpas referred the families to us and undertook the communications with them.  Many thanks for your support.

Our thanks go to –

Jane Higginson Trust; Aviagen Turkeys; Whitchurch Rotary; Wem Rotary and many individual donations that enable this initiative to be financed.  Plus of course the generous donations of food to the Foodbank.  2.7 tonnes were received in the month of December!

Thanks also for the help and support received from Argos (toy collection); Co-op, Sainsbury’s and Tesco supermarkets plus the folk from Wem Methodist Church who helped us with distribution.

A special thank you to Thomas Adams School who donated £450 of the money raised from their Christmas fayre.  Following consultation with ourselves they then went shopping and used the money to purchase required items.  A total of 249 kgs.

Finally, wonderful support – we could not do it without you and the way in which we all work together.  Responses from the families confirmed the food was very gratefully received. 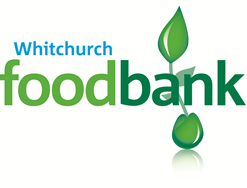